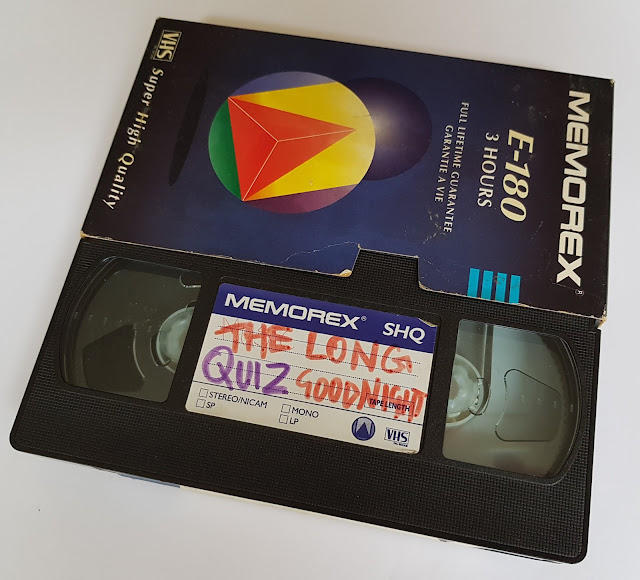 If you like movie films but you aren't weird about it or anything; this is the movie film quiz book for you. Packed with over sixty unique rounds and a Godzillas-worth of all new questions, "The Long Quiz Goodnight" is Ben Baker’s biggest quiz book yet and a funny, quirky but actually quite good collection of trivia about all kinds of cinema spectaculars that’s perfect for all of the family, including...
- The greatest opening lines in film;
- Learn some probably definitely true facts about Bill Murray, Bette Davis, John Wayne and Tom Cruise;
- What the censors cut from your favourite flick;
- Attack Of The Rotten Tomatoes - can you guess the actor from their best and worst film?;
- The weirdest cameos committed to celluloid;
- We sing Hoo-Ray For British Films!;
- The best and worst of Disney;
- A tribute to the biggest Box Office Bombs;
- Which movie myths are actually true and which are a load of old tut?;
- Remembering Neon and the great movie magazines of the 90s;
- a foreword from comedian, podcast man and trainee Ghostbuster Paul Gannon from Cheapshow, Barshens and Digitiser: The Show.
PLUS: Movie siblings, Adam and Joe's Toymovies, deleted scenes, crazy credits, in-flight movies, biopics, Saturday Night Live, kids favourites, American beauties, the wonderful world of Monty Python, depression, spin-offs and sequels, rockers on film and Great Film Year celebrations of 1966, 1973, 1978, 1981, 1989, 1993, 2003 and 2010. AND LOTS MORE! 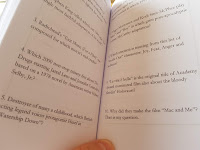 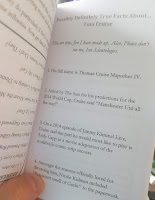 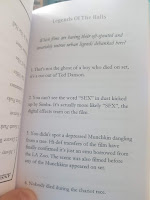 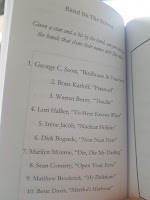 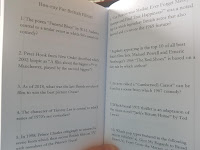 This book has taken me around three months to write, edit and compile and I'm incredibly proud of it. It's hard to sell a quiz book because there's thousands of them but I really do try to write something which is a bit quirkier, funnier and unlike any other as the above examples hopefully prove. If you know anyone who loves movies and want a cool not in the shops gift please do consider investing in one of my books. I also have three more volumes on general knowledge, pop and TV which can all be found at benbakerbooks.co.uk. And if you've bought one already or even shared the link around, thank you. Without you, there'd be none of this.

Until next time, keep infinitying them wars and Jurassicing all Parks. Thank you.
Posted by BenBaker at 09:00 1 comment:

I Got Out Of Bed With Oucho And Ed

An article from many years ago about a man and his cactus. Probably a bit more crude than I'd write now but still very proud of this piece from Talk About The Passion. Click any of the images to embiggen them. 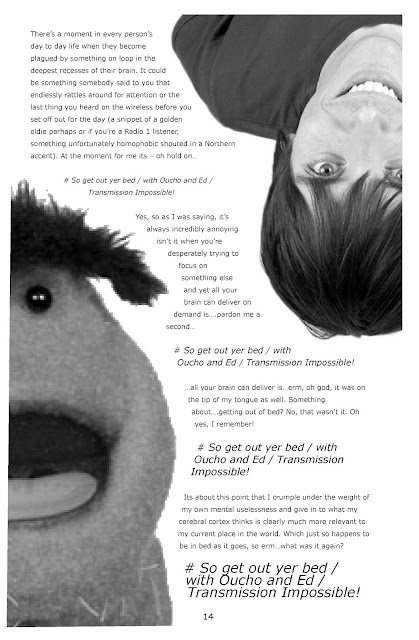 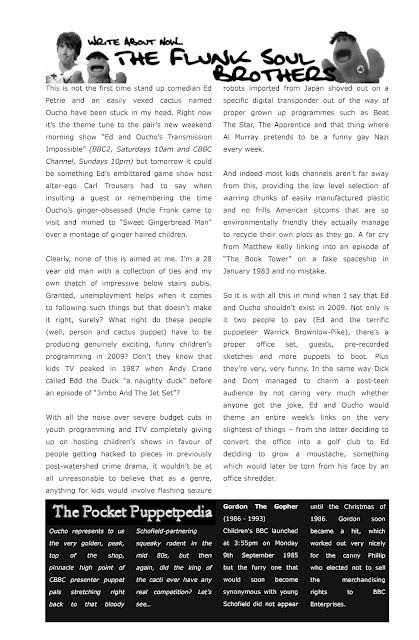 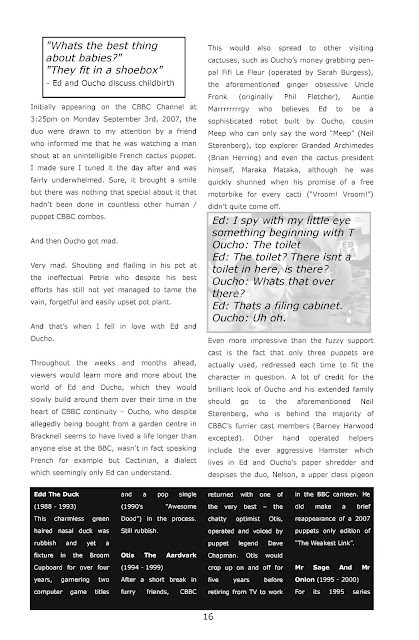 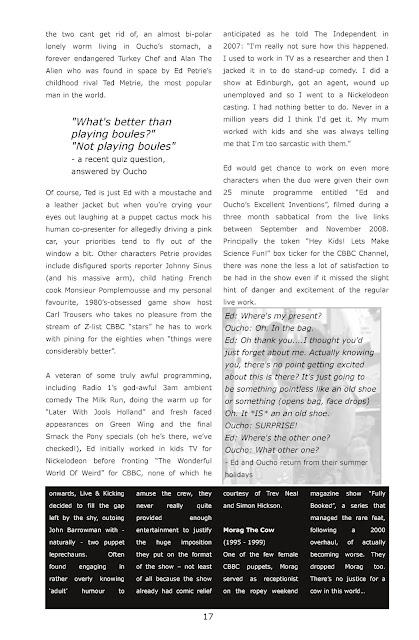 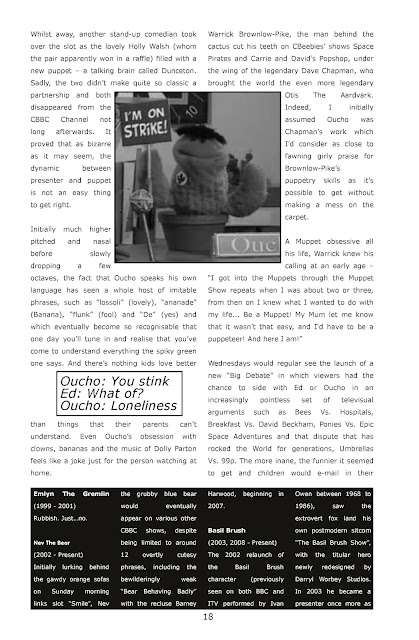 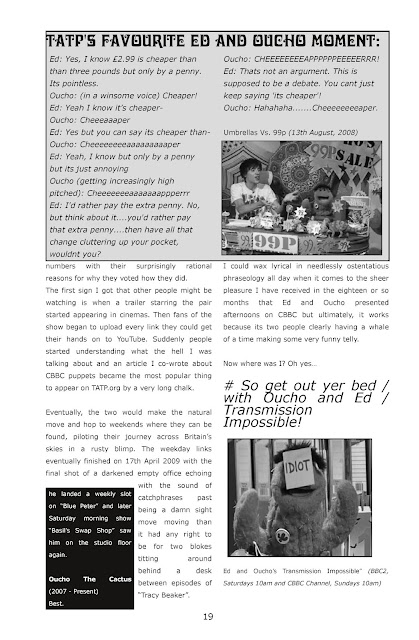 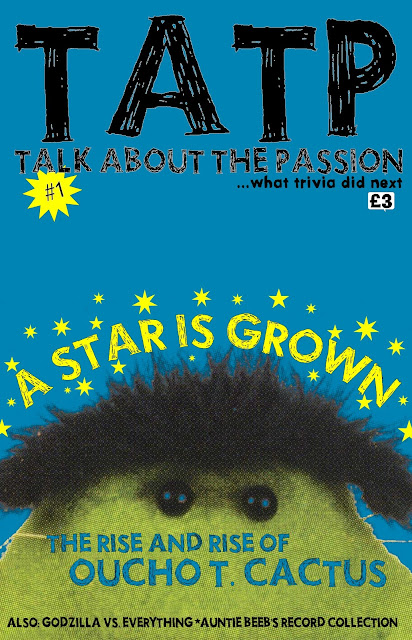 And if you like it, there's loads more of that pop culture nonsense stuff here in the collected "Talk About The Passion" book priced right dead reasonably on the Lulu Press. Ta.
Posted by BenBaker at 10:24 1 comment: 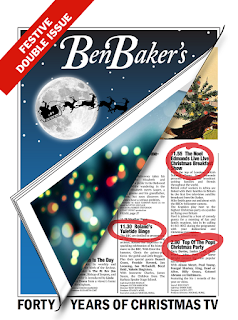 Christmas invariably means excess – be it through food, drink or television. Whether it's Morecambe and Wise recreating Singin' In The Rain, the Trotters dressed as the Dynamic Duo or EastEnders running over a baby for light relief, TV is our very pal throughout the entire turkey and tinsel period. This book pays tribute as forty years of festive programmes are viewed and reviewed in over 250 mini-essays by Ben Baker.

Alongside the classics there's the likes of Kid Creole’s strange post-watershed musical about racism, Roland Rat going to Switzerland, Skeletor learning the true meaning of Christmas, Doctor Who's original spin-off, The Bee Gees teaming up with Frankie Howerd for a medieval comedy and Feargal Sharkey having a nightmare on a Concorde whilst the Krankies watch on in helpless bemusement high above the Telecom Tower. Plus much much more. But for real. Not just like when people ay that in adverts when there's actually about three more things. This is packed with Christmas memories both obvious and obscure and I know its going to set off some "OH YEAH!" glands in a lot of people's brains.

Its been my big project for the last few months and I'm incredibly proud of my work. So it'd be lovely to get it into as many hands as possible so click below to buy a copy! Because as the mighty Noddy Holder from Not Slade 2 informs us every December time in his loudest voice, “THE GRIIIIIMMMMLLLLLEEEEYYYYSSSS IS ONNNNNN!” Also: Christmas

Its that ham again! Yes, I had so much fun with my appearance on my friend Tim Worthington's podcast "Looks Unfamiliar" a few months ago that we did it again.

As Tim puts it: "Looks Unfamiliar is a podcast in which writer and occasional broadcaster Tim Worthington talks to a guest about some of the things that they remember that nobody else ever does. Joining Tim for a second time is writer, broadcaster and quizmaster Ben Baker, who shares his not-widely-shared memories of Children's ITV magazine show Toksvig, the Whizzkids' Guide book series, sophisticated yet not exactly enlightened board game Mysteries Of Old Peking short-lived pop-punk sensations Mo-Ho-Bish-O-Pi, drug-fuelled post-Tarantino shock-comedy Go, and the entirely sensible hobby of making your own TV listings magazines. Along the way we'll be taking some advice from a Charcoal Jeremy Beadle, finding out why Ben had to hide his secret drawings of the Yorkshire TV logo, why Sandi Toksvig was at risk of exploding at any moment, and revealing which Shane Meadows film is not as good as a hat." 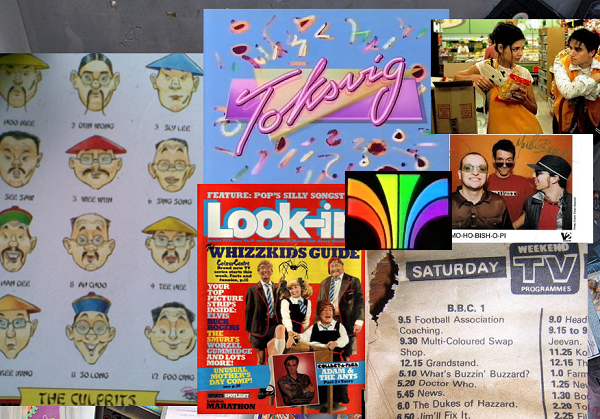 
I think this one is a lot more fun than the first with a lengthy attempt to untangle old television stations, work out just how racist a board game can be, wonder why the early noughties were such a joyless time for alternative music, celebrating the fantastic work of Jeremy Beadle in a genuine and unironic way, make our own listings magazines and suspect nobody remembers the follow up to "Swingers" at all.

Telly addict? Box clever? Then you need Remotely Interesting, my new quiz book featuring over 50 all-new quizzes all about television. There's something for everyone from ALF to Z Cars, Brian Cox to Brian Griffin, Good Morning Britain to Newsnight, taking in the full TV experience from the opening theme tune to closing credits.


This is the third of my "Your Starter For Ben" quiz range and people who liked the my other work will hopefully recognise and appreciate the comic tone running throughout particularly with longer form pieces such as a round about TV shows with video game spin offs or several encounters with Donald Trump's Twitter feed spouting off on any programme he's not currently in. Its a creative, funny book unlike any on the market today. I've spent a long time researching, writing and editing this book to make sure it has appeal to both telly obsessives and casual viewers who fancy something to liven up that boring, ill-advised family holiday to Penge.

Here's a few of the highlights:

- Guess the subjects of invariably mad real letters to the Radio and TV Times;

- Donald Trump's Presidential Tweets on programmes past and present;

- Remembering when stars switched channels in When They Went To Thames At The End;

- Go beat with the many TV appearances of The Fab Four Beatles Band;

- 'Netflix and keeping our hands where I can see them' with the non-TV TV revolution;

- Preparing for the end of the world with post-apocalypse programming;

- Can you guess the show from the Eight Word TV Tango?; 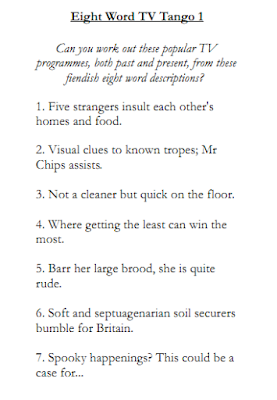 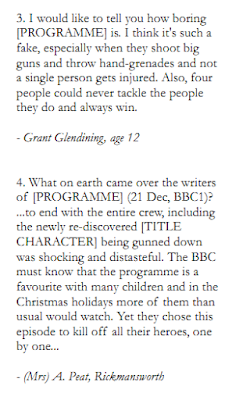 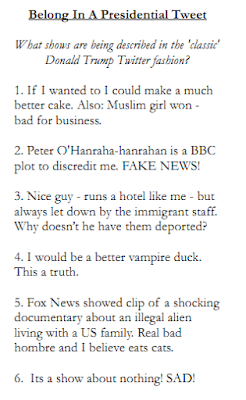 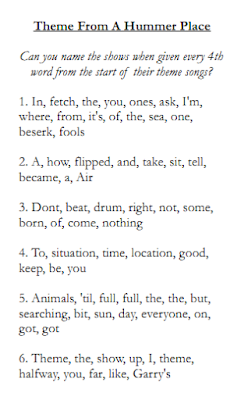 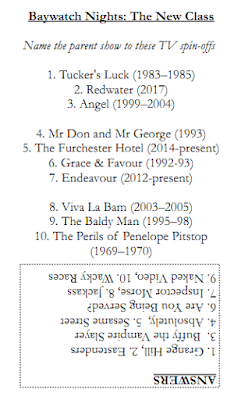 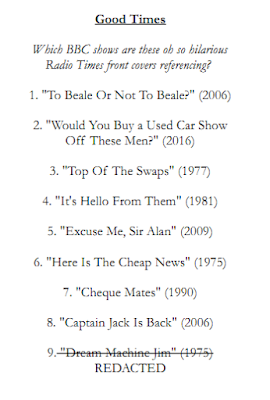 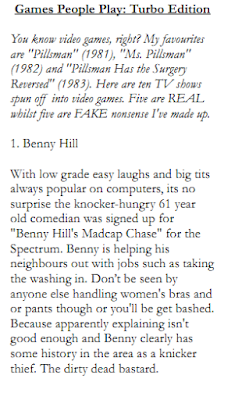 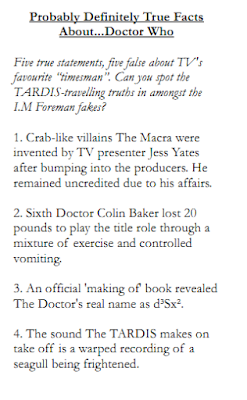 Thank you and happy dynamic quizzing! 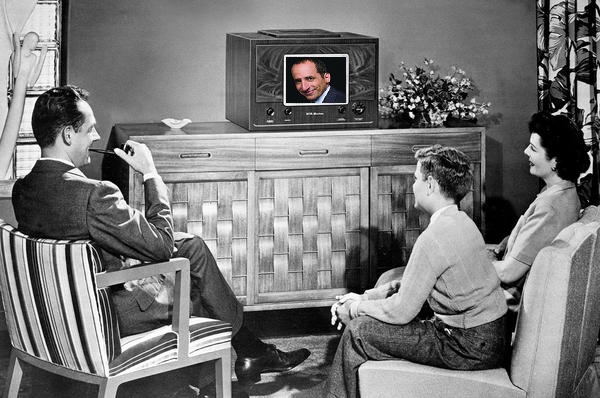 "its that taub again"
Posted by BenBaker at 12:00 No comments: 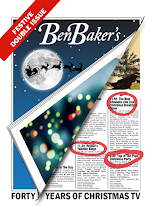 Get your copy of my brand new TV book here!